Been a while since I've written a blog but figured new year, new team, renewed enthusiasm!

Down in the South West the race season starts very early with a 3-event series of 56 kilometre pursuit races known as the Springtime Pursuits. This year they altered the format slightly to give the 4th Cats a separate race, with the 3rd Cats having a 7 minute advantage over us in the scratch group which makes the race very different tactically. It means no breakaways for the Elite riders, as we all have to work together or we won't catch the front group over the very short-distanced race.

A minor sore throat that timed itself perfectly for the 1st round of the series meant I wasn't racing at my best but managed to finish 7th, and in the 2nd round the scratch group didn't catch the front group with an 8 and a half minute deficit. However I am happy with the races, as it is still February they are definitely "pre-season" races where we regain the sensations of riding as a peloton, after many hours in the saddle either solo or two-up it is needed before the major races when the season starts!

This weekend will be the 3rd and final race of the Springtime Pursuits on the Saturday, followed by the Southern Semi-Classic, the Severn Bridge Road Race. This will be my first race alongside members of my new team, Team Herbalife-Leisurelakesbikes.com, proper racing! Plus my new kit arrived this week from Santini, and it has to be said it is the best kit I have ever worn. I'm not one to lie about products...I am very opinionated when it comes to equipment and the combination of design and quality of the kit is second to none. 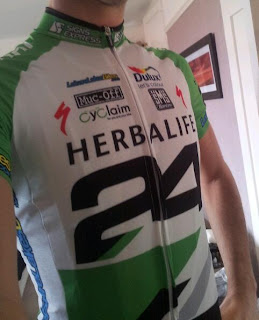 I'll leave you with a sneak preview of my new kit, and follow up with some (hopefully) good news after the weekend!
Posted by Junior at 11:29